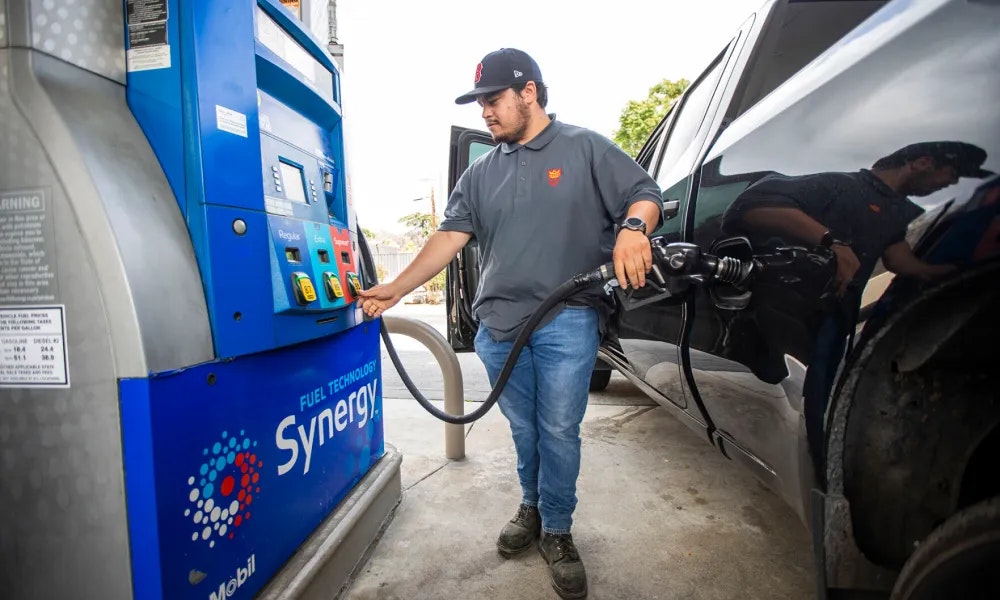 The new milestone comes two months after the national average surpassed $4 for the first time in 14 years, and the average has not dipped below that price point in the meantime.

Prices are highest in California, where gas is at $5.84 a gallon. A number of factors make their gas prices higher than those of other states, including the lack of interstate fuel pipelines along with an unexplained surcharge that has appeared on consumers’ bills in recent years.

The prices come as the European Union edges toward oil sanctions on Russia as a result of their invasion of Ukraine. It also comes amid record-high inflation, with the consumer price index reaching 8.5% in March.

The prices come as the European Union edges toward oil sanctions on Russia amid the Kremlin’s invasion of Ukraine. It also comes amid record-high inflation, with the consumer price index reaching 8.5% in March.

The White House has blamed Russian President Vladimir Putin for the record-high gas prices in the U.S., the increase was labelled as the “#PutinPriceHike.” Biden also vowed will do everything he can to shield Americans from “pain at the pump.”

Biden, last month, announced that the Environmental Protection Agency will allow the sale of E15 gasoline, this is a gasoline that uses a 15% ethanol blend, across the country this summer.

Biden has also moved to release 1 million barrels of oil per day from the Strategic Petroleum Reserve for the next 6 months. The president is also calling on Congress to make companies pay fees on idled oil wells and non-producing acres of federal lands, aiming to incentivize new production.

According to Yardeni Research, increased oil costs suggest the average American household will pay almost $2,000 more for gasoline in 2022, according to a March research note.

And where I am the price for regular gas is now $4.59 a gallon. This is the result of Mr Biden and the fake-Environmental movement. People need to learn about the Little Ice Age and Medieval Warm Period. If the planet warms everyone will benefit and if CO2 levels go up plants will grow more and we will have more food. Look at the real events – especially those over the last 60 years.