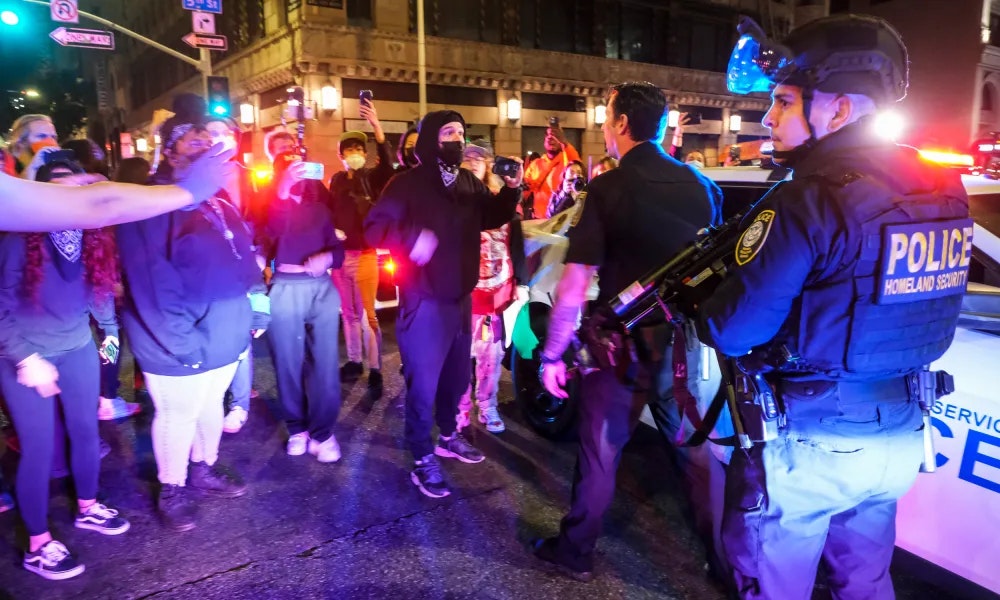 Written by Roy Batty on May 9, 2022. Posted in Accountability, First Amendment, Judicial, News.

Los Angeles police clashed with protesters on Tuesday night when demonstrators gathered to protest the potential overturn of Roe v Wade based on a leaked draft opinion from the Supreme Court was published by Politico on Monday night.

About 400 people gathered outside the federal courthouse on Tuesday evening in Los Angeles to speak out against the highly controversial draft opinion and what it would mean for women’s health if the ruling legalizing abortion were overturned. Speakers addressed the crowd to tell their abortion stories and encouraged others to continue protesting and resisting a change to Roe.

At approximately 7:30PM, LAPD officers escorted a group of about 250 protesters in a march from the courthouse to nearby Pershing Square. A group stopped and attempted to take over an intersection, drawing commands from police and an effort to remove the protesters from the street.

At that point, the LAPD says the crowd began throwing bottles and rocks at officers. The small clash was dispelled, but at about 8:30PM another group began trying to take over an intersection.

LAPD drove two marked cars into the middle of the intersection to prevent protesters from gathering there, leading to more violence between officers and protesters. Demonstrators pounded on police cars, a gym’s window was broken, and police hit some protesters with batons during the clash, which lasted until about 9:20 when the LAPD declared the protest unlawful and dispersed the crowd.

The demonstration was one of many around the country after the SCOTUS draft was leaked on Monday night.