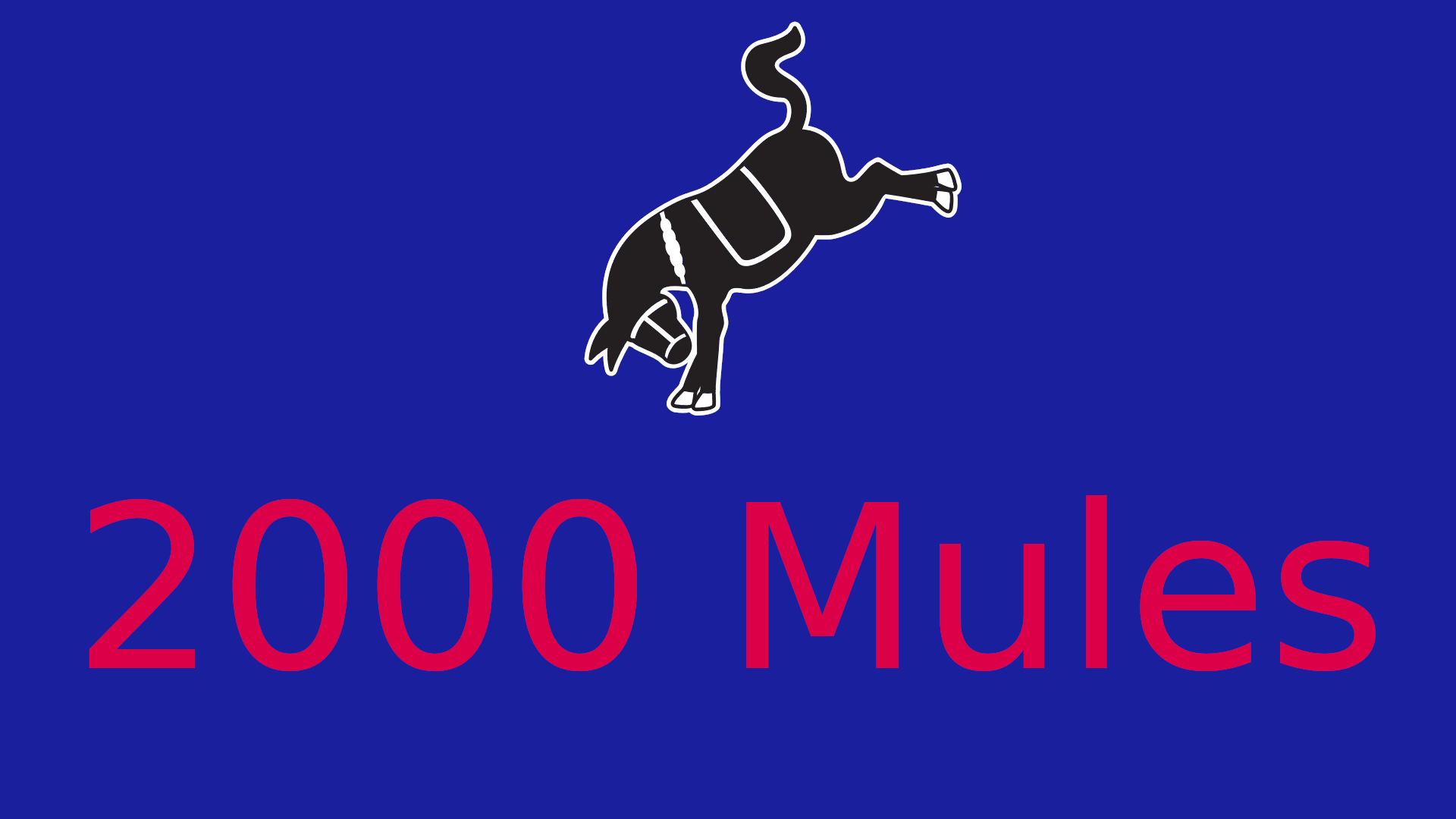 For those now scratching their heads and asking, “Two Thousand What?” A mule, in criminal parlance, is one who carries contraband for pay. In this case the contraband is absentee ballots.

In every American precinct, only the voter or a member of his family may handle a ballot. That covers everything from filling it out to carrying it to a drop box or mailbox. The only third party any Board of Elections trusts is the United States Postal Service. So the only people who so much as touch a ballot are:

If anyone else handles a ballot, that person has committed a crime.

The Election of 2020 saw large numbers of designated ballot drop boxes all over a precinct, and unattended. Many of these did not even have surveillance cameras watching them, though some did.

Furthermore, through geotracking, D’Souza and his allies show that one person might do this at thirty or even fifty drop boxes in one night. Geotracking means following Global Positioning System signals from a person’s smartphone or similar device.

And D’Souza conservatively estimate that more than 2000 mules carried ballots on Election night; hence the title.

Outline of the film

The film 2000 Mules begins with Joe Biden’s memorable slip of the tongue:

We have put together … the most extensive and inclusive voter fraud organization in the history of American politics.

Viewers might catch him also saying, “You guys did this for the Obama administration.” Which raises even more questions, even apart from Mitt Romney running a campaign to lose.

But the film does not stop here. It moves on with:

Then D’Souza introduces his allies, including especially the True the Vote organization. Then for more than half an hour they show one element of illegal activity, the titular 2000 mules. D’Souza shows who they are, what they did, and how True the Vote and others could prove their movements afterward. They use geotracking records and, where available, surveillance footage to document their movements and their activities.

Did these activities alone sway the election? They certainly could have – because in Georgia, Arizona, and Pennsylvania alone, the mules in those States carried more illegal ballots than Biden’s margin of victory. Those three States alone would have given Trump the electoral votes to win.

The second half of the film goes into other evidence, like:

Remember, too, that 2000 mules is a conservative estimate. Nor does this film cover Mike Lindell’s allegation that Dominion Voting Services systematically hacked their own machines, or left “open doors” for the People’s Liberation Army Ground Forces Cybernetic Warfare Division or some other bad actor, to do the hacking.

Most of all, it shows where the money came from – mostly from Mark Zuckerberg’s Center for Technology and Civic Life. This money did not go for masks and plexiglass shields at the polling place. The bulk of it went to pay these 2000 mules – or however many more mules were at work that night.

D’Souza also addresses objections to the narrative about fraud deciding the election. Why, for example, did Republicans win down-ticket? Why did Nancy Pelosi lose strength in the House of Representatives? Because the operation needed too many ballots. Time was when you could “vote a straight ticket” with a single lever pull on a Print-O-Matic voting machine. But by the mid-Seventies every State had abolished that. And when you vote on paper, you must darken every oval for a candidate for whom you want to vote. The bulk of those ballots that the 2000 mules carried, were undervoted. Thus they had votes in the Presidential election and not down-ticket. One can well imagine that Nancy Pelosi wanted to strangle whoever organized such an effort and neglected to allow enough time for down-ticket voting.

One objection is almost specious: why didn’t the Democrats cheat Glenn Youngkin out of his victory in the Virginia Pre-Midterm? Not because they didn’t try – but because patriotic voters made that impossible. They registered more Republican voters. They voted early – so no one could vote in their place. Furthermore, they trained polling place challengers – poll watchers. Some of us (including your editor) signed up to become Officers of Election. And maybe most of all, the Democrats lost their baseline. Fraud can’t sway an election without a large-enough baseline of genuine supporters. When Terence McAuliffe said parents have no standing before their county Boards of Education, he threw away that baseline.

The film 2000 Mules ends with the most important question: how to keep this from happening again. Several States have passed laws forbidding private funding of elections. We also see laws severely limiting mail-in ballots, and making sure all drop boxes will be:

Nor will True the Vote stop with the release of this film. Already they pledge to release all the evidence they gathered for this project, whether D’Souza used it or not.

Perhaps if Joe Biden hadn’t made such a mess of the economy, none of this would make any difference. Criminality does not stop until authorities apprehend, try, and punish the criminals. But this time, Biden has lost his baseline, as McAuliffe did. Without the baseline, even 2000 mules – or more – could never have succeeded.

Midterms are the key. The Virginia Pre-Midterm proved out methods to combat the fraud, now that people know what to look for. What reforms we can hope to see next, will depend on our margin of victory.

[…] Yesterday the Biden administration continued its energy squeeze plan. They canceled a large sale of oil and gas leases in Alaska and the Gulf of Mexico. Furthermore they did this at the worst possible time: when fuel is running short and sells at record prices. Can they fail to realize how this will anger the American public? Have they forgotten that people vote? Or does it not matter to them, because they plan a repeat of 2000 Mules? […]