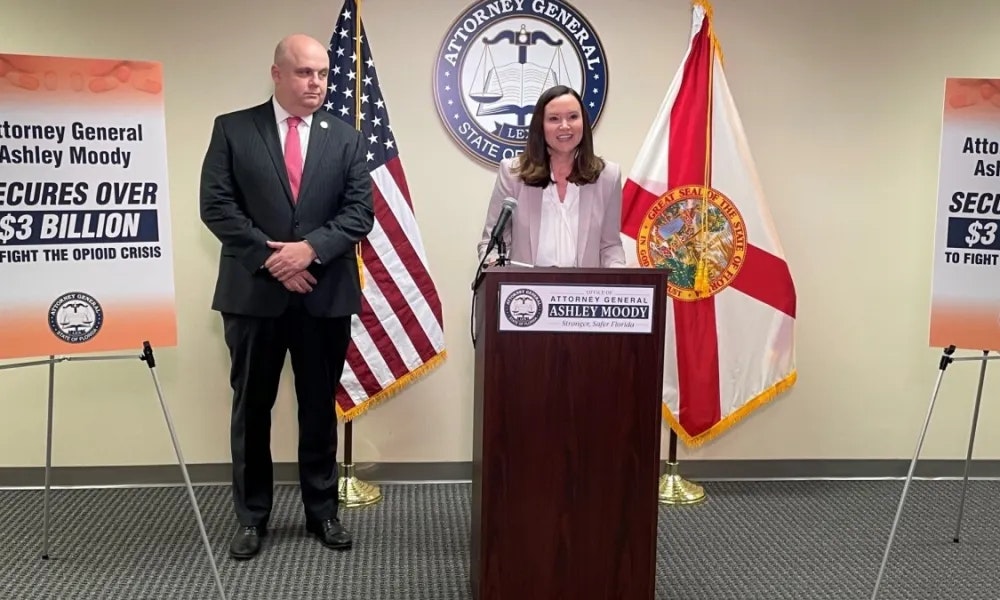 Written by Hans Gruber on May 8, 2022. Posted in Judicial, Money matters, News, Science.

Florida Attorney General Ashley Moody announced a collective $3 billion has been secured from the results of lawsuits by Florida over opioids.

In the lawsuit specifically against Walgreens, Moody said $680 million had been secured for Florida communities and recovery.

“This has been a long hard-fought battle to get where we are today and to be in a position to announce such monumental news,” Moody said. “While we are making this announcement today locally, the result of this historic settlement of funds will have far reaching effects across this state and beyond the Tampa Bay region.”

Moody said over the past four weeks, the state of Florida has been embroiled in a battle with Walgreens over the opioid epidemic and crisis, and how Walgreens “helped fuel the epidemic of addition that plagues” Florida.

“The state has now successfully concluded litigation with Walgreens, and as a result we have secured more than $680 million for the state of Florida and hurting Floridians,” Moody said.

“This is a promise kept to our citizens. Before taking office, I vowed to seek accountability from those who helped fuel the opioid crisis. As my work as a prosecutor and a judge, seeing the devastation first-hand, I resigned to be an active player and ensure that redress was afforded to our state and our citizens. I stand before you today to say we have successfully accomplished this mission.”

“This announcement brings the total funds secured through all of our determined litigation efforts to more than $3 billion for the state of Florida. These monies will be paid out over the next two decades and help abate the opioid crisis and help families and communities heal throughout our state. The funds will go to communities hit hardest by opioid abuse, and they will be spent on treatment and prevention. The funds will undoubtedly save the lives of Floridians. What we have accomplished is no small feat. In fact, Florida continues to lead the nation in legal efforts to hold defendants accountable for their unique roles in this public health crisis.”

Moody said that their work wasn’t done yet, as the state loses an estimated 21 lives per day to opioid abuse. “For the first time in our nation’s history, 100,000 Americans overdosed and died from drug use in a year,” Moody said.

“With these funds Florida goes on offense to stop addiction and save lives. We now go into battle armed and ready to fight back hard against this manmade crisis. And we do it in unison with the more than 200 cities and counties that have stepped up to support and benefit from our litigation efforts. Much of this money will flow to the hard-hit areas and will be used locally, where they can do the most good and help families struggling because of opioid abuse.”

Moody described the result as historic for Florida and for those struggling against addiction, and for the communities across the U.S. suffering due to the opioid crisis.

“I am glad we have been able to end this monumental litigation and move past the courtroom,” Moody said. “Once we have moved past the courtroom and secured these funds, real progress can begin in saving lives. Please know that the battle we have waged has not just been in the courtroom. It will continue to live in our streets, within families, within an individual life that is suffering from addiction. But I am hopeful that moving forward we can begin to turn the tide of this crisis and change lives and our state forever.”