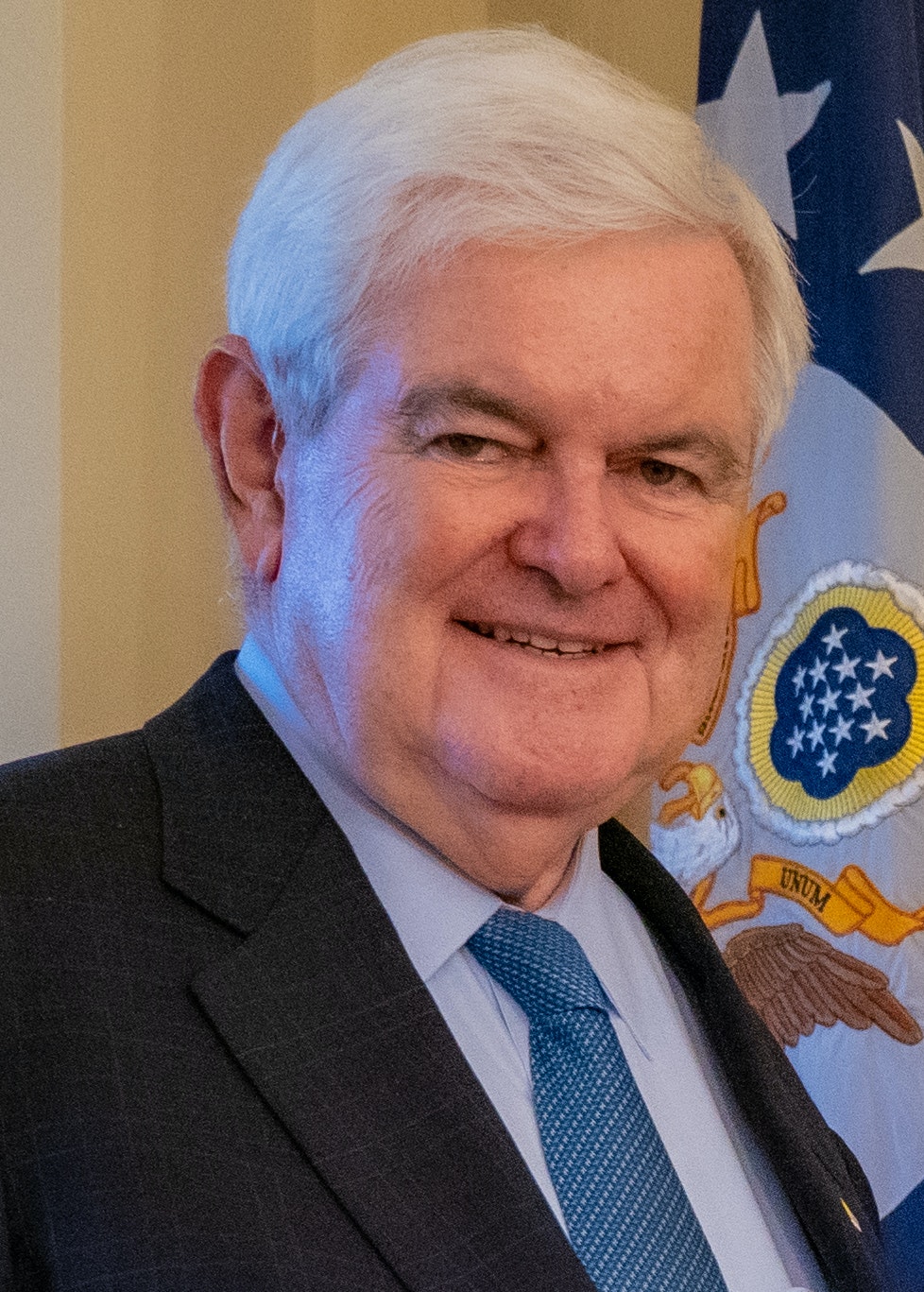 Last week Newt Gingrich wrote a scathing column suggesting that members of the House January 6 committee face punishment. He further suggested they will face punishment, after the next Midterms brings Republicans to power in the House. Newt Gingrich defended his column on Fox News Sunday Futures yesterday (23 January). When he did, he raised the stakes by suggesting some of the “wolves” could go to jail for their acts. Naturally he has drawn a firestorm of retorts.

Naturally readers, and especially his targets, will accuse Newt Gingrich of even more outlandish things. So before discussing any threats he made, or their credibility, one must review his remarks critically.

When some people acquire power, they act like wolves. They take whatever savage actions are needed to win and dominate. They turn their opponents and critics into sheep, who learn to be quiet or face vicious attacks and destruction.

Newt Gingrich cited Josef Stalin, Fidel and Raul Castro, Robert Mugabe, and Hugo Chavez as historical examples. No one who examines those examples can miss his point. All those men made revolution that differed little from armed robbery. And in fact the platform of the Democratic Platform is a robber’s dream. The hints, not all of them subtle, point to two things: redistribution of wealth, and the destruction of the class that once held it. A thief is an irregular wealth-redistribution agent. Likewise a murderer is an irregular revolutionary executioner. Remember this as the Midterms election campaign begins – and when judging Newt Gingrich and what he said.

Enemies of the people

Watching the increasingly vicious and destructive actions of the House Democrats—along with the handful of Republican enablers on the January 6 Select Committee—combined with the astonishing viciousness of President Joe Biden’s speeches at the U.S. Capitol on January 6 and in Atlanta on January 11, as well as Attorney General Merrick Garland’s speeches and actions, has been the most sobering period in my more than 60 years in public life.

Actually Mr. Gingrich is more generous than he needs to be. By “handful” he means two nominally Republican members of the House Select Committee to Investigate the January 6 Attack. (Yes, that is indeed the official name of this Committee.) Those two are Representatives Liz Cheney (R-Wyo.) and Adam Kinzinger (R-Ill.). Mr. Kinzinger will not even seek re-election. Ms. Cheney will, but already is drawing primary challengers like sharks to chum.

We now have a president and an attorney general who see at least half the country as their enemies. They are focused on attacking, smearing and defaming fellow Americans with whom they disagree. More frighteningly, the attorney general has the power to direct the FBI and U.S. Attorney’s Offices to frame people and put them in jail on the most trivial of charges.

Who are they and how is the Committee punishing them?

All correct – except that CNAV maintains, as does Mike Lindell, that more than half the country are the enemies of this administration. That includes perhaps six million voters whose votes the People’s Liberation Army Command, Control, Communications, and Cybernetic Warfare Corps switched from Trump to Biden by manipulating Internet-connective (and connected) scanner-tabulators from Dominion Voting Services. Mr. Lindell has the Internet packet traces to prove this. The new social-media platform Frank Speech has all the videos.

Even laying that aside, we know that the Democrats thoroughly compromised the FBI, beginning with Obama’s term. Donald J. Trump’s worst failing was failure to fire all the Obama holdovers. Today those holdovers are scaring half the country by picking people from that half to arrest.

The January 6 Select Committee is in the process of potentially bankrupting scores of Americans who worked for or supported President Trump. They face financial ruin defending themselves against the committee’s attack. The legal costs of fighting subpoenas and the further cost of legal counsel if put under oath by a hostile congressional committee creates a real burden. That financial burden is compounded by the psychological stress of being under assault by the House Democrats—and potentially also the FBI.

CNAV has said from the start that the January 6 committee exists to propose bills of attainder and an ex post facto law against Trump and all who voted for him. Newt Gingrich has given details, and many others will corroborate what he says.

What exactly does Newt Gingrich propose?

Newt Gingrich, in this column, did not propose to send any members of that Committee to jail. He did urge the current House Minority Floor Leader (Rep. Kevin McCarthy) to write at once to:

The letter would be a formal demand to preserve emails, notes, meeting minutes, and other documents for review when the new Congress convenes after Midterms. After that, Newt Gingrich proposes certain penalties that would require censure. Censure requires only a majority vote; expulsion requires two-thirds, as per the Constitution. The penalties he proposed involved denial of substantive committee assignments and the most extraordinary penalty of all.

The Wolves to Sheep Committee – what would that be?

This would be the creation of a “Wolves to Sheep Committee” to which the new majority would presumably assign:

This Wolves to Sheep Committee would have

no staff, no legislative jurisdiction and no honor. It would be the equivalent of the ancient Greek punishment of ostracism.

You’re not Air Exec anymore; you’re just an airplane commander. And I want you to paint this name on the nose of your ship: “Leper Colony.” Because in it, you’re going to get every deadbeat in the outfit – every man with a penchant for head colds. If there’s a bombardier who can’t hit his plate with his fork, you get him. If there’s a navigator who can’t find the men’s room, you get him. Because you rate ‘em.

CNAV can find no precedent in the historical record for such a sanction. The real equivalent of ostracism would be expulsion. And again, that requires a two-thirds vote. This document describes all the punishments the House can mete out to its Members, and the votes required for each.

So when did Newt Gingrich speak of jail time? Not until he appeared on Sunday Morning Futures. There he told the interviewer:

And the wolves are going to find out that they’re now sheep and they’re the ones who are in fact, I think, face a real risk of jail for the kinds of laws they’re breaking.

He did not make clear who was actually breaking laws that carry a prison term for their breach. In fact the House can, again with two-thirds, expel a member who has committed felonies. And a precedent does exist for the imprisonment of a sitting Member of Congress. That would be Rep. Matthew Lyon (Dem-Rep.-Vt.).

He in a trice struck Lyon thrice upon his head, enrag’d, sir.

Who seiz’d the tongs to ease his wrongs, and Griswold thus engag’d, sir.

Rep. Lyon went to prison for violating the Sedition Act and won re-election while serving his sentence. Newt Gingrich is accusing certain Members of civil-rights violations, including prosecutorial harassment and selective application of the law. The civil-rights violations might be felonies, in which case even the Privilege from Arrest Clause would not protect the violators.

Naturally Reps. Cheney and Kinzinger would not – could not – let that pass.

“When the rule of law unravels”? Oh, that’s rich. Adam Kinzinger added a movie clip – with picture, but no sound.

Nor did the reaction stop there. Here’s Rep. Eric Swalwell (D-Calif.):

No, Mr. Acosta. Though he could certainly argue that the overthrow of the government took place on 3 November 2020. Why else would Members of Congress think they could actually pass bills of attainder or an ex post facto law?

Er – no. There was no insurrection. We saw a false-flag pseudo-operation. That alone should send people to jail, though not necessarily Members of Congress.

Jennifer Rubin, you have it backwards.

And how about Rep. Swalwell threatening gun-rights advocates with nuclear attack? And last:

Truth is an absolute defense. And a committee whose mission amounts to bills of attainder and an ex post facto law really has no mission.

Not all the reaction is negative. Tom Fitton of Judicial Watch reminds us:

In other words: truth is an absolute defense.

Sadly the American people are too divided for justice to come through the usual channels. CNAV has no doubt that Rep. Adam Schiff (D-Calif.) will coast to re-election. Not only is his district ultra-safe, but his constituents no doubt feel as he does.

So if Newt Gingrich wants to take alarm or umbrage, then his quarrel is with those who:

Let anyone who doubts that, consider the survey in which fifty-nine percent of self-identifying Democrats want the government to enforce quarantine by military or paramilitary force. Whether that means house arrest or building internment camps. Those same people really believe, or want to believe, that the January 6 event was an attempt at insurrection.