When they dump Hillary, then what?

Written by Dwight Kehoe on October 31, 2016. Posted in Executive.

Editor’s Note: this essay appears in the context of this op-ed piece in The Chicago Tribune, 29 October 2016. In it, Mr. John Kass, “Contact Reporter,” flatly called on the Democratic Party to ask Hillary Clinton to step aside.

As the excitement builds, as the anticipation grows, that the Clintons will finally be held to account for the decades, of corruption, intimidation, missing or dead antagonists, there comes with it a certain amount of angst.

This anxiety may be based on the fact that when Hillary is dumped by the Democratic Party, the government will still be under the control of the leftist Justice Department and the lying scoundrel now serving as President. The worry is that Obama will delay, postpone or cancel the November 8th election until such time that the Democrats can come up with a replacement candidate. We will get to that in a moment. 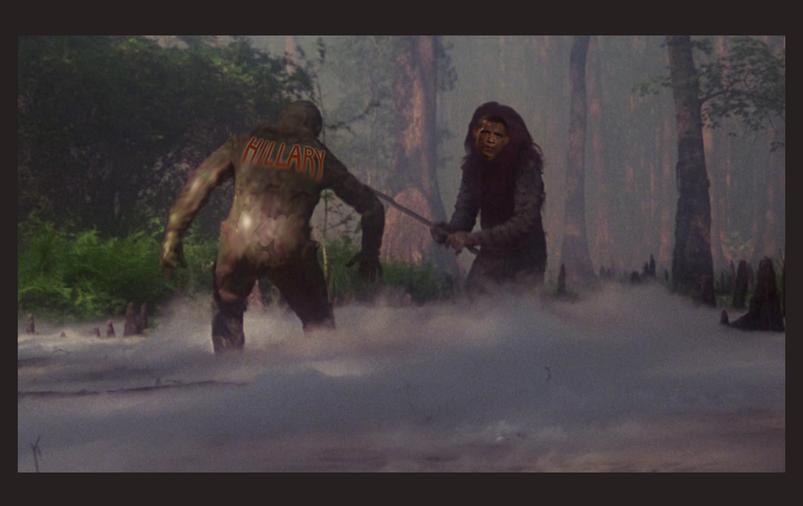 Prediction! The Democratic leadership, the establishment, those many faceless people, some of whom are not even known by the general public, will remove Hillary as the nominee of their party. How do we know this? No one who becomes an impediment to the continuation of leftist ideology, even a powerful and slimy Clinton, will avoid being fitted with concrete shoes and sent to the deep end of the pool for a doggie paddle lesson.

This is absolutely true and Hillary, if she is not already aware of it, is about to experience an awakening. All the millions and millions of dollars at her disposal, the reams of raw FBI files still in her possession from her first invasion of our White House will not protect her from ideological wrath. When it becomes unequivocally clear that she will lose on November 8th, her days are numbered. In fact her hours are numbered. As of last Friday, that clarity has taken root.

Plans for just how they will do this and what they can do to resuscitate this election are being focused and formulated, right this minute. There are furious discussions of just what they can do, legally or not, ethically or not and with the help of Obama, leftist judges and justices, to get back into this race. Once they have come up with a game plan, Hillary will be notified of her volunteered resignation. She will be permitted any explanation she chooses, except that she is a crook. Then they will announce who will replace her as the nominee. The resignation will happen by the end of this week. Most likely, on Friday.

After Hillary, delay the election?

So what dirty trick could they be conjuring? Their deviousness has no bounds, history attests to that. So it is difficult for honest, moral people to even begin to anticipate the possible Machiavellian moves. But having said that, there is no doubt that they will whimper on about not being able to compete fairly if they don’t have time to present their replacement candidate to the American people. They will demand that Obama postpone the election for period of time, 6 months or even a year, to give them an even shot.

This of course would be illegal and unconstitutional, but that has never been an impediment or a distraction for a leftist agenda. Postponing the election would extend the term of a sitting president beyond the Constitutional limit of 4 years. While the 12th Amendment does not address the length of a presidential term it does limit the number of terms to two. So if you combine the 12th Amendment with Article II Section 1, a sitting President can be in power no more than two four-year terms, unless that President assumed the office of a removed or deceased President who had less than two years remaining. There is no stipulation that would extend his term or circumvent the 8 year limit. That of course will be ignored by Obama as he tries to stay in power beyond the legal limit.

No authority to delay

As far as postponing the election, there is nothing in the Constitution that gives a President that authority. It can’t be done by Executive Order because the election is done by the individual States and is not under control of the Federal government. Again this is not to say they won’t try.

The final thing that they will attempt to pull off is saying that it is not fair that the Democrats are not able to provide their voters with a viable candidate. To this it is important for our side to make sure any judges or justices who may get in involved in this to understand that our Constitution does not provide a spot on any ballot for any political party. Regardless of how many people or what percentage of the voting population are registered to a particular party. In other words, the Democratic Party, the Republican Party or any party, does not have a constitutional right to a spot on any ballot. They will no doubt endeavor to invent one, but it does not exist.

The states are given the right by the Constitution to provide the manner in which they will allow candidates to be placed on their ballots. No State has the right to interfere with any other state’s process, nor does the Federal government hold that right.

If the Democrats decide that they have chosen a looser, a crook, a schemer and a conniver and then choose to remove that candidate, it is their choice and right to do so. There is however, nothing in the Constitution that protects a political party from their own stupidity and arrogance.

They made their bed; let them lie in it!

Constitutional attorneys better begin to prepare for the onslaught which is about to come at the American people. They need to be reminded that they did have the opportunity to provide a suitable candidate but chose to select a renegade, while at the same time they chose to cheat the other candidate, Bernie Sanders.

They trolled in the swamp and swamp vermin is what they got.

Nothing in the Constitution protects them from that.

Reprint from TPATH. You can also download a PDF of this article here.