Why Trump will prevail

The Trump campaign should be throwing thank-you bouquets at Hillary’s minions for unearthing an 11-year-old video of the businessman speaking raunchily about women to Hollywood Access host Billy Bush. Why? It demonstrates the sheer panic the Hillary campaign is in at the devolving internal-poll numbers that show the ailing candidate barely keeping her [involuntarily] bobbling chin above the water line of decisive failure.

We see Trump but not Hillary 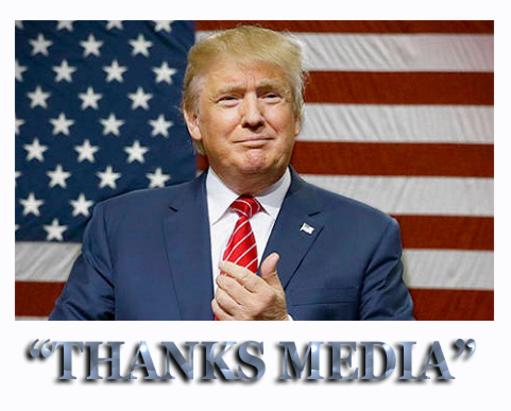 It highlights the startling absence of the MIA candidate,who has not been seen since a campaign appearance in Ohio on October 3, leaving surrogates to speak in her stead. This strange absence, just weeks away from the vote for president, tends to confirm the suspicion that Hillary’s frequent symptoms of illness––spasmodic coughing fits, seizure-like head jerking, inability to ascend stairs without men gripping her arms, a left eye that turns involuntarily inward, episodes of freezing in mid-sentence––utterly disqualify her from the office she seeks, which demands top-notch physical strength and mental acuity.

Speaking of acuity, we already know that Hillary’s judgment is gravely impaired. Who else uses private servers that are sieves for our national security secrets; lies repeatedly and compulsively to camouflage her disastrous foray into Benghazi; was a central player in facilitating a deal, through the Clinton Foundation slush fund, that gave Vladmir Putin overwhelming control over the global uranium supply chain; and who chooses Sen. Tim Kaine as a running mate?

Kaine is a man who writer Scott McKay describes in “The Kaine Scrutiny” as:

…having “a history of anti-American radical leftism…for nearly 40 years,”

…being a friend and ardent follower of “a violent Communist lunatic…”

…having “a history of selling himself out to the Muslim Brotherhood,” which has poured huge money into his coffers

…bringing “the stench of corruption with him, something that seems inescapable with any Clinton minion”

The two main drivers of human behavior are money and ego. As far as emotions, jealousy tops both anger and passion. This week’s brouhaha is all about all three––money, ego and jealousy.

In little over a year, Mr. Trump effectively decimated the startlingly ineffectual and traitorous Republican Party, picking off 17 highly credentialed and longtime operatives––including governors, senators, and congressmen. Former Florida Gov. Jeb Bush had raised so much money––into the mega-millions––before he even announced for president, that his entrance into the race was considered a de facto win. Trump swatted away this buzzing gnat, as he did Ohio Gov. John Kasich, Texas Sen. Ted Cruz, et al…swat, swat, swat!

To his credit, Trump took his undisputed swatting championship one step further in leveling the self-important media types who (1) credit themselves with electing Barack Obama by concealing his past and overlooking numerous racist and inflammatory remarks (including as he read from a book: “gotta have them ribs and pussy too”), as reported today by The Drudge Report, and (2) creating and maintaining the leftist narrative that their globalist bosses demand.

In my last article, I cited the research of Ashley Lutz at Business Insider, who reported that only six organizations are now responsible for 90 percent of all of the “news we read, watch and listen to.” That’s right—in 1983, there were 50 media companies, today only six, all run by business titans involved in many of the massive, multibillion-dollar deals that drive international politics, that determine the bad-for-America trade deals our “leaders” have signed, and that members of the Democrat-Republican cabal have financial interests in.

The net result, of course, is that dozens of politicians and media shills have been walking around for over a year with bruised and battered egos and fulminating anger, as well as anxiety about their investments, all waiting for their moment to pounce.

And here it is––Trump was caught being crude over 10 years ago! You can just hear the Europeans screeching with laughter as they stand on their elegant balconies flanked by their wives and girlfriends. And the Middle Eastern potentates rolling on their palace floors as they give the nod to excising the clitorises of young girls and stoning “sinning” women to death. And of course, the thousands of professional American athletes slapping their knees and wondering if they themselves would get the death penalties for things they’ve said and done.

Actually, the entire fiasco has been a good thing for Mr. Trump, who now knows definitively who his enemies are on the Right. Like cockroaches being flushed out by a skilled exterminator, turncoats––like former NY Gov. George Pataki, Utah Sen. Mike Lee, New Hampshire Sen. Kelly Ayotte, the appropriately named Idaho Sen. Mike Crapo, former Secretary of State Condoleezza Rice, phony conservative radio host Hugh Hewitt, and among the most loyal allies of Barack Obama and Nevada Sen. Harry Reid, none other than Speaker of the House Rep. Paul Ryan––are making one last desperate scramble, urging Trump to drop out of the race and hoping that his locker-room talk over a decade ago will finally destroy the man who single-handedly exposed and upset their cozy ole-boy-network.

So predatory are they now acting that it’s not at all far-fetched to suspect that it is these very marginalized has-been Republicans who probably orchestrated this sabotage against Mr. Trump to begin with.But while his flushing of the pundit and TV dissemblers has helped their approval numbers plummet deservedly into single digits, the craven media continue to cover for Hillary (ala their bosses’ orders) and convince the stupid public to forget how complicit she is and was in her husband’s depravity.

Hillary tolerates much so she can loot the country

Pure fact compels me to rename the former secretary of state The Human Spittoon (THS).

…the serial cheating going back to their Arkansas days, a clear spit in Hillary’s face

…a 12-year affair with Jennifer Flowers, a spit in the eye

…Kathleen Willey, a spit to the chin

…Juanita Broaddrick and the rape allegation, a hawker to the face!

…Monica Lewinsky…the cigar, under the oval office desk…a hawker to the forehead!

…the stained blue dress with guess whose DNA on it? Beyond spit, beyond a hawker.

What kind of woman tolerates these indignities? Clearly one who thinks a push-button gizmo from Staples will mollify a Russian dictator and an illegal computer server will conceal her crimes. In other words, a weak and corrupt woman, not a leader by any definition of that word.Donald Trump has called Hillary an enabler. While true, this seems mild and understated. In fact, Hillary represents a full third term for Barack Obama, complete with:

We know a winner

Yet, the clueless media, the desperate Democrats, and the jealous Republicans––all still nursing their bruised and battered egos––would have you believe that We the People should be inconsolably upset by some stupid remarks Donald Trump made over a decade ago, and in response should flock to the polls to vote for a woman whose fans cannot name a single one of her accomplishments in over 40 years in public life.

We’re not that stupid. And Donald Trump, again to his credit, is not a man to allow this coordinated intimidation effort either to bend or break him.Let is be known that we Always Trumpers stand together proud and strong. We know a dragon-slayer when we see one. And we know a winner!

A REMINDER to everyone going to the polls on November 8th: Wear RED. 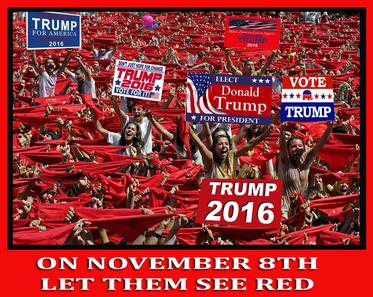 Don’t forget, Democrats are now rushing to register dead people, illegal aliens, felons, etc. By wearing red to the polls, THE SEA OF RED will assure that no media outlet can overcome the VISIBLE support for TRUMP/PENCE. WE WILL HAVE VISUAL PROOF, via your photos and videos, in district after district, that Hillary Clinton could NOT have won these ALL RED districts!

Media, poll workers, watchers, campaigns, and voters on the ground will have no choice but to acknowledge the VISIBLE truth in a sea of RED.