Written by Dwight Kehoe on March 26, 2016. Posted in Constitution.

Would anyone in America consider for a single wild and crazy moment that the son of one the most deadly Islamic terrorists of the past 50 years could be eligible to be President of the United States? If you ignore Article II of the US Constitution and the absolutely clear intent of the Founding Fathers, but instead agree with Mark Levin and Lyin-Ted, he would be.

Crazy? Not just crazy, but suicidal. So imagine this scenario.

How even the son of a terrorist might be eligible, if… 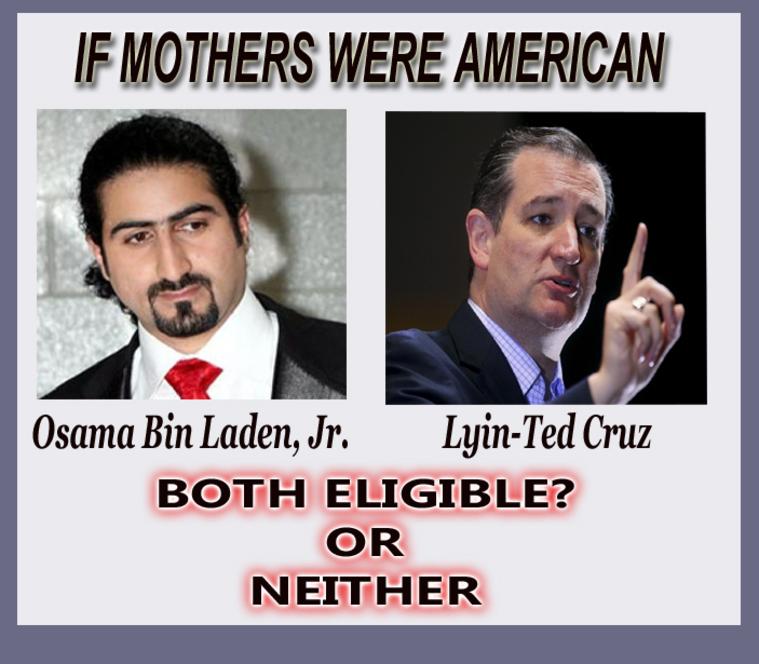 Osama Bin Laden, decades ago, while organizing, training and financing Islamic terrorist groups in Afghanistan meets a young female from America who is working in Kabul for a humanitarian organization.

She hits it off with Osama and a few of his wives and accepts a proposal to become wife number 5. They get married and a short time later, Osama Bin Laden Jr. is born. During the next 20 years the young Bin Laden is educated in the ways of Jihad and just after his father’s insides were splattered around a compound in Pakistan, Junior heads to America with his American mother.

If you are to listen to the idiocy being proffered by Levin and others, Osama Bin Laden Jr. would be no less eligible than Lyin-Ted Cruz. The only difference between the two relate to which foreign country they were born in and what foreign country their fathers held citizenship in.

It appears my good people, the Founding Fathers were just a little bit more intelligent than that idiot judge in Pennsylvania, Mark Levin and other various fools who would jeopardize the future of this country in support of a singular, ineligible man.