Any questions that the Trump candidacy and run for President of the United States isn’t a true revolution were dashed by the near-riot in Chicago from the American Left-wing.  However, this left wing also includes the GOP “establishment” which—for years—was called the “Rockefeller Wing of the Republican Party”…the group which was joined at the hip with the Democrats and would come to be known as part and parcel to the New World Order.

The establishment fights the revolution 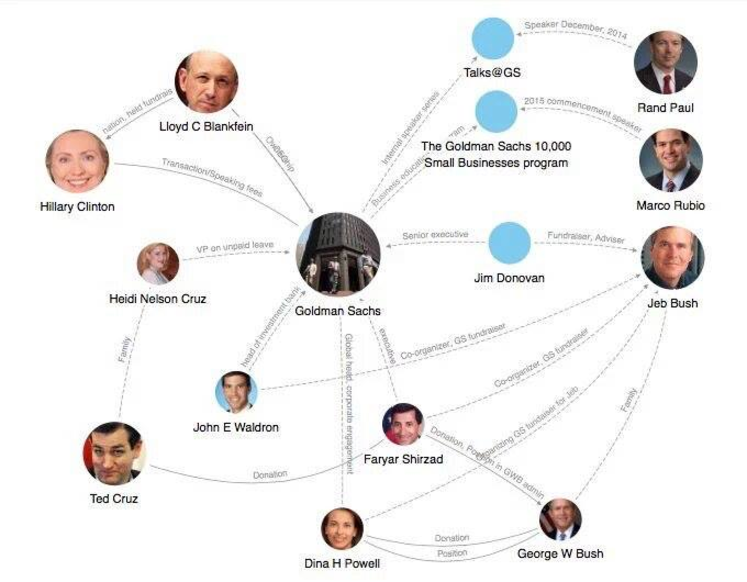 The establishment—both Democrat and Republican–is now coming out of the shadows.  This includes all 3 of the other GOP candidates. Cruz and Rubio are blaming Trump—of course—and Rubio when asked said that he didn’t know if he would now support Trump as the GOP candidate if Trump wins the primaries.  Note…both Rubio and Cruz have direct ties to Goldman-Sachs (the so-called “Bank of the World”). (See the diagram at right.) Trump is now being blamed for the violence perpetrated by those who want to shut him up.

This is what the beginnings of any revolution encounters, folks. When truth is finally spoken, those who profit from lies strike back at the truth-tellers. The would be masters of their fellow humans are cowed by the truth and those who speak it…frightened to such an extent that they will do anything to stop them. Trump’s rallies have always been peaceful, with the exception of the paid agitators and protesters.

Last night’s near-riot from the Left (Moveon.org which was started by George Soros) and—likely—collaborating GOP establishment was to show We-the-People what we’re in for if we continue to fight the enslavement they have planned for us.

Those candidates who want have no real intention of rocking the boat and want to continue with business as usual and the decline of our country (think Hillary, Cruz, Rubio and Kasich) speak out against those who want to reestablish free enterprise, prosperity, freedom of expression and the ability to choose one’s own life path are not only vilified but, are to be stopped in any way necessary.  When the other 3 candidates support the illegals entering our country (don’t listen to what they say…check what they’ve actually done), letting in those with an ideology of destroying our country from entering it (Islam is the most violent ideology on the planet and was written to be so by it’s “prophet” Muhammad) and shutting down those who would have the audacity to actually cite the ways in which to fix the problems are nothing more than pawns of the global elitists and one-world-government group.  These types must no longer rise to power.

A revolution is seldom-to-never pretty. We’re experiencing the beginning salvos. But…a revolution can and does bring Liberty…something we in the USA have not had in a very long time.  It’s the other side that brings thistles for grapes.

“Ye shall know them by their fruits. Do men gather grapes of thorns, or figs of thistles?”–Matthew 7:16

Rubio lies about reason for near-riot then indicates he won’t support Trump
https://www.washingtonpost.com/news/post-politics/wp/2016/03/12/given-violence-rubio-says-he-now-doubts-that-he-can-support-trump-as-the-gop-nominee/