Written by Dwight Kehoe on October 3, 2015. Posted in Constitution.

There came a time, not long ago, when I found myself  amidst a journey, making a trek across a formidable desert terrain in an effort to get from the place where I was to the place I wished to be.   My journey almost complete, there came a sight, distorted by shimmering heat waves wafting from the sand to the sky.  As I drew closer and the vision cleared, my approach brought me to a passageway.  This path, it was quite clear, was the only means of egress between two massive mountains having the sheerest of walls which extended from horizon to horizon, and peaks which towered above and beyond the ability of my vision to perceive them. 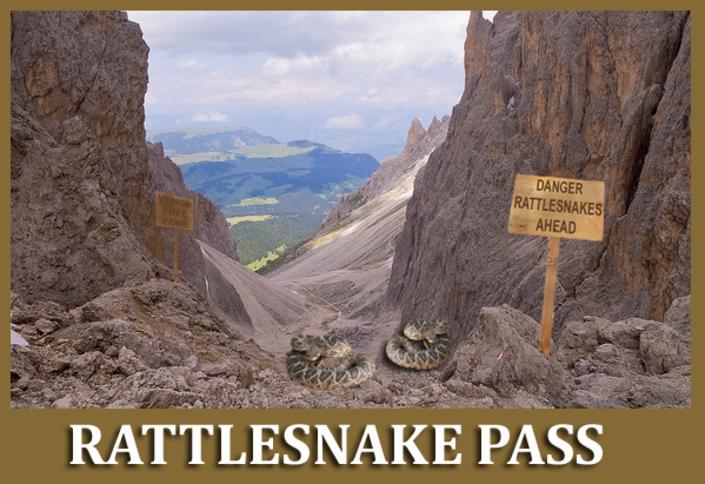 Moving ever closer to this pathway my attention was drawn to a worn and withered sign, tacked on a feeble and wobbly post.  It read simply “DANGER-RATTLESNAKES AHEAD”.   This of course raised a certain amount of consternation as I was poorly equipped for such an encounter and as such understood this might not just impede my journey, but end it for all time.

Peering through the haze, off to the west, I noticed what appeared to be a small village.  There I imagined, I could inquire as to the extent of this viper menace, prior to an effort to pass through it.   And too, I might possibly be able to purchase things which would help make my trip through that passageway, shall we say, less eventful.   So off I went, on my mini detour which I had hoped would, in the long run, save me time and more likely, save my life.

Entering onto the first little street which appeared to be Main Street and being in a hurry as I was, I approached the first person I saw.  He was a small spindly little guy with skin of tawny-pink and it was I who spoke first.   This encounter, by luck or chance, introduced me to one who claimed a position of village leadership.   What a nice turn of events that was.  So, immediate to my purpose I asked “what’s the story with the rattlesnakes and how dangerous is that passageway?

The elder responded with dire exhortations of how perilous and deadly that route, at one time had been to any traveler foolish enough to make an effort at getting through.  But not anymore.  You see, the village leaders had taken steps to make it safer to travel through that pass.  That was certainly a welcome relief.

Since the village official used the word, safer, and not safe, my next question was,  “ where could one find a store in which one could buy heavy duty boots and possibly a tool or implement that could be used to protect oneself against those rattlers, if God forbid, there came a need to fight them off?”

I was then informed that years ago those things were available and in fact were quite commonplace.  However the village elders have since determined, that owing to several occasions when heavy boots were misused by a few miscreants who would trample through gardens of flowers and fruits, passed were decrees making them unavailable without receiving special dispensation.  The trampling of vegetation had always been an unacceptable activity in a village of such civility.  Therefore, heavy boots that could be used in an assault on gardens, have been banned.

Upon further discussion I found out that the implements I sought which were also commonly used in the past, had also been outlawed.  There came an event where such tools had been used for purposes of ill intent.  This too, could not be abided in this fine village.  A law to control whom could utilize such dangerous things had been instituted and very rigorously enforced.

Well then I declared to myself, all that seemed quite rational for a village of such fineness and since the elders had remedied the danger and thereby rendered the passageway I was about to embark on safer to pass through, I asked of the maker of rules and laws, what would I need then, to make my trip through the pass, less perilous?

Oh! I was informed, nothing is required for you to do.  “Did you not see the other sign we provided at the entrance?”  I was told it is just steps beyond the first sign which created my initial detour to this fine and decent village.  Feeling foolish, not just for taking up this fine elder’s time but also for having wasted precious travel time.  I thanked him for all he had done for the fine people of his village and for the help he had afforded me.  And so, I was off to complete my journey at the point where I had left it.  Confident now that this final leg of my trip would be eventless and most assuredly, “safer”.

As I approached that first sign, the ominous one warning of dangerous rattlesnakes, I once again felt trepidations but they were calmed by my recalling that this had been fixed by the village elders.  I knew that, because they told me so. However, still with a slight sense of foreboding I then came upon the second sign that I was told of.  When I drew close enough to make out the wordage, all my fears and foolish anxiety were dispelled as I understood the brilliance of those village elders.  I stiffened my back, straightened my shoulders and proceeded directly into the passageway as I passed the sign that read “VENOM FREE ZONE”.

October 3, 2015 ~TPATH~ The latest massacre by this latest monster needs not to be described in detail in this article because there is and will be hundreds of places where true, untrue and misleading information will be available.  What you will get here, from TPATH are a few things you will not get anywhere else. But first the three things you can be assured with absolute certainty will be front and center.

As reinforcement to this third thing, did anyone notice how hastily that vile creature, that Muslin Socialist, that freedom hating usurper ensconced in our White House, paraded in front of not just America, but the entire world, and once again gave a speech that attacked America and our Founding Documents?

How quickly can speech writers prepare and then present a speech like that to the President?  One might be cynical and suspect that this speech had been written well in advance of this latest violence.  One could also, knowing these cold, heartless people as we do, suspect that when the news broke there were great feelings of elation amongst those scoundrels as they now would get to use that pre-ordered speech and take another shot, so to speak, at gun confiscation.

The dead and the wounded were not yet counted.  In fact the dead were still warm when this vile inhuman being, with total disregard for the families of these unfortunate victims, while speaking behind a phony façade of woe and gloom was hardly able to contain his glee and good fortune at knowing there might be another opportunity to drive a stake into the heart of the United States Constitution.

Now a few facts, love them, hate them, either way they cannot be denied.

Hmm… Replace “rattlesnakes” with “deer” and I do live in that place. They don’t bite, but they injure, maim, and kill themselves and those who share their habitat..