Written by Dwight Kehoe on August 27, 2015. Posted in Constitution.

It is true that a very strong argument​ can be made that the 14th Amendment is the most powerful tool in the battle to support the 2nd Amendment, in that it forbids States and the  Federal Government from applying and enforcing laws or regulations unequally, from citizen to citizen.  In The Brief, the SAPPA Group references that Amendment in several of its Claims for Relief.

This Amendment, even if the 2nd did not exist, does not allow any government, state, local or federal, to deny law abiding citizens their right to be armed if they permitted the rich, the elite and even law enforcement officers to carry weapons.  It is true policemen are, because of their jobs, more likely to need a firearm for self-protection than the average citizen.  But so too does the common citizen occasionally find himself or his family in equally dangerous situations. Unlike the liberal ideologues who make illegal laws, the 14th Amendment places equal value on the lives of all citizens.

We have shown in a previous article, that the police are not armed for your protection, but for their own.  That they need protection when they investigate and then attempt the arrest of a criminal who just killed an unarmed citizen.

Why did Congress write the 14th Amendment? 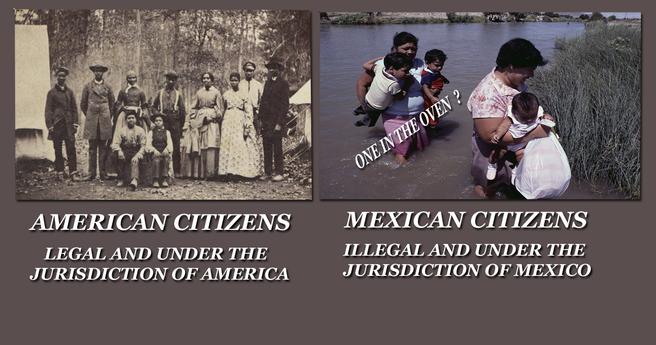 Having said that, the 14th Amendment is not about the 2nd Amendment, not directly anyway. It was designed, authored and passed for one reason and one reason only.   That being, to halt Democratic politicians, judges, and police from denying freed slaves and their offspring the same civil rights as whites.

Emancipated African slaves were routinely rounded up, shot or hung for no other reason than they were not white.  The unfortunate souls who met those violent fates were not allowed to carry or even own firearms.  This left them at the mercy of the well-armed lynch mobs.   Because the ex-slaves were either brought to America as property or were born of those who were, by claiming that these people were not “citizens”, the bigots were able to condone, in their own minds at least, their unfair treatment of them.

Hence, the Republican Party began to work on the 14th Amendment.  It would, among a few other things, prevent the Democrats from keeping blacks unarmed while allowing whites to use them for target practice.  The other important thing and the most imperative to the authors and supporters of this new Amendment was to remove the question of citizenship relating to the status of the slave and his children.  The Southern Democrats could no longer apply laws differently based upon the fact that blacks were not citizens. This in and of itself clearly indicates why, even to this day, the Democratic Party and its liberal leadership, still despises the 14th Amendment.

However, now the Democrats see a new use for that Amendment. That is as a tool to destroy conservative values in America while adding millions of uneducated and dependent voters to their ranks.  They now love that document and can’t say two sentences without referencing it.  But, typical of progressives, as they spout the first requirement for citizenship, they ignore the parts they don’t like.  We will explain that in a minute.

It cannot be denied that the 14th Amendment to the Constitution in 1868, was about one thing: the civil rights of freed slaves and equal protection, under the law, for each of them.  It was not written to encourage people from other countries to enter America illegally and biologically anchor themselves here.

Two years after the Civil War, the Reconstruction Acts of 1867 divided the South into five military districts, where new state governments, based on universal manhood suffrage, were to be established. Thus began the period known as Radical Reconstruction.

At the conclusion of the Civil War, in 1866, the Republican Congress took steps to address the issue of citizenship for the freed slaves and enacted the Civil Rights Act, 14 Stat. 27 ch.31. This legislation defined and provided a definition of US Citizenship. Once again the Democratic Party tried to get in the way of liberty and equal justice for African Americans and as a result Congress had to override the veto of their legislation by the Democratic President, Andrew Johnson.

Fearing that a future Democratic Congress might undertake the dismantling of the Civil Rights Act, they sought to enforce it by way of the first clause in the 14th Amendment. Citizenship is defined in that clause as such:  All persons born or naturalized in the United States, and subject to the jurisdiction thereof, are citizens of the United States and the State wherein they reside.

Take special note as to the purposeful and intentional insertion of the words, subject to the jurisdiction thereof.  Though these Republicans were not bound with the same intellectual cloth as the original Founding Fathers, they were however, able to foresee problems and misuse of this Amendment and included a road block to open ended illegal baby farms whose product would be new American citizens.  If they had intended to exclude just Indians and foreign diplomats they would have written it that way.

As the debate raged in the Senate, much of the time contentiously, it focused in part on the difference between the language in the definition of citizenship in the Civil Rights Act of 1866 and the proposed amendment. Balancing between the fear of another ruling such as the infamous Dred Scott debacle and open access to citizenship for anyone and everyone, the compromise came in the use of the term, subject to the jurisdiction thereof.  That would not be the last time the Republicans would underestimate the underhandedness of those sitting across the aisle.

We now know that the 14th was not enacted to create a free pathway for illegal aliens to anchor themselves into America by way of the baby “flop and drop”, but was instituted in an effort to undo some horrendous wrongs inflicted upon the freed slaves and their families who were brought here against their will and then denied citizenship by the same people who bore the responsibility for them being so far from the country of their birth.

The term jurisdiction thereof was at the time a well-used term in international law.  The founders chose those words because they had meaning.   That is, anyone here legally is under our jurisdiction.  By clear and unambiguous reasoning, anyone here illegally, is not.  This would and should, the authors of the 14th may have presumed, been clear enough for even the dumbest student in the dumb class to understand.

But when one political party is seeking to pad its voter registration and the other party is supported by those seeking near slave labor, that supposed clarity fogs up rather quickly.

Let’s then take a hypothetical. Two illegals from Mexico drop off a fence and into a border town motel in Arizona.  Lo and behold, the very next day, a little bambino arrives.  Question: Are those two parents not citizens of Mexico?  And are they therefore under the jurisdiction of Mexico?  No jurisdiction prevails for them here since they are technically, not here.  All three are citizens of Mexico, not America or Arizona.

Don’t believe it?  Here is the Mexican Law on Citizenship.

The Law of Nationality

According to Article 30 of the Mexican Constitution, “Mexican nationality is acquired by birth or by naturalization.”

MEXICANS BY BIRTH ARE:

·        “Those that are born in the territory of the Republic, whatever the nationality of their parents.”

·        “Those born outside Mexican territory of one or both parents that were born in Mexico. “

As this battle to save our country and preserve our borders continues during the next several years, we will all be told that the Wong Kim Ark Supreme Court case changed everything in that Wong Kim Ark was allowed to stay and receive citizenship because he was born here even though his parents were not citizens at the time of his birth.

This, like all things liberal, is false.  Wong was declared to be a citizen, by that ruling, because he was born in this country and under the requirements of the first phrase of the 14th Amendment, he was indeed a citizen.  Be aware the ruling did not say he was a citizen simply because he was born here, but that he was born here to parents who, though not citizens, were here under the jurisdiction of the state and federal governments because they were here legally.

Editor’s Note: Bill O’Reilly, of Factor fame, cited another case that happened to speak of children “born in the United States, therefore citizens.” But any such declaration in that opinion is strictly obiter dictum. The reason: the same Supreme Court that made that “by-the-way saying” also said the two Mexican nationals in that case had to go, children or no children.