It’s not clear if the Main Stream Media, FOX News and the RINO Establishment have successfully baited the Trumpster into self-destruction.  It’s not clear if all those people who were on board with Mr. Trump will now start to abandon him.  Maybe they won’t but a few early polls ramrodded through in the wee hours after the Donald made his “Blood Statement”, clearly show he is beginning to lose some support.

Look before you leap away from Trump

But wait!  If you are one of those jumping ship you had better stop and reflect on a few things first.   Why, for instance is there a Donald Trump in this race? The answer, of course, is that there would be no Trump if our party stood its ground, said what needed to be said, refused to back down from statements which need to be stated and most of all, did for America what they promised to do.

Have you ever asked yourself:

Their every action, their every thought, their every utterance and their very world is and has been controlled by the fear of the twisted and mangled, manipulated and misrepresented statement.  So, once again, why do they allow this environment where they operate to prevail?  Well, mostly because they enjoy the nice easy life they are living and that takes precedent over all things, including any silly oath they took to protect and defend the Constitution.  These people and those attitudes are why we find ourselves in such dire straits.  These people, your GOP, your so called leaders are the reason there is a Donald Trump.

Vacuous leadership draws in a leader

Nature detests a void.  The American people have a need for a leader, a fearless leader, one who will fill that void which has for far too long been engulfed in a jungle of liberal programs and feckless phony RINO opposition.  Now comes a man.  Not on white stallion with glimmering credentials, nor one  showered under the glow of a heavenly halo.  But a man.  A man willing to take on the enemies of your freedom.   A man willing to spend millions and lose millions to help his country reverse its march towards an economic and Constitutional collapse.

A man who does not fear the fools in the media, does not sit and nod, smile and grin, while his positions are attacked, his ideas perverted and his intentions maligned.  We have now a man who will not allow those attacks to go unaddressed.  A man who will not wallow in fear, but will, without hesitance battle our enemies wherever he encounters them,  whether it be a high brow black tie dinner or in the slimy pig sty of progressive politics.

Realism about Donald Trump and his opponents 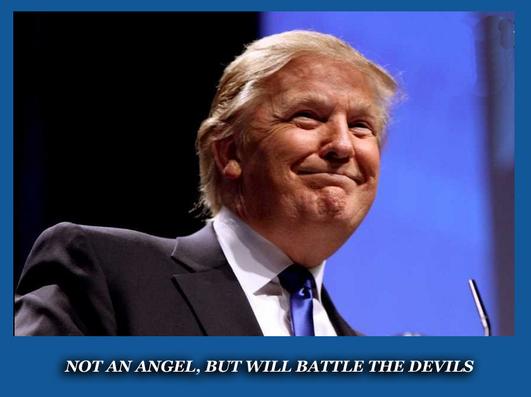 Does he offer something that we have never seen in American politics?

So if you are thinking Trump made a comment that is not presidential and you believe he intended to say something he says he did not say just because his enemies in the media and in the GOP establishment say they know better than he what he meant when he said what he said, then go my friend and rejoin the pansy GOP.  But remember if you keep voting for those who have given us what we got, we will continue to get what they are giving.

One thing can be promised.  If you abandon this guy now, those Lilly Livered Republicans who have helped the left destroy this country, will see what speaking out gets you and will, if it is even possible, fall further into the acquiescence of political correctness.

While TPATH has not as yet endorsed any candidate we do not ever intend to abandon Trump so long as he is saying what needs to be said.  Crude sometimes?   Yes! Is that not what we have been waiting for.  What this country needs? With his belief that what is in his heart needs no parsing, he will many times leave the door open to word jockey scoundrels.

Why has Trump arisen from the desert of non-compliance to irritate the Republican establishment.  They had better begin to look at that reason.  The American people have.

This country, our America, has arrived at a place and time, where we do need a Donald Trump.  We should all thank God we now have the chance to have a Donald Trump.  It will take some courage to withstand the onslaught.  He has it. Do you?

Editor’s note: Over the weekend, Donald Trump said, “Megyn Kelly loooked [as if she had] blood coming out of her eyes, blood coming out of her . . . wherever.” He could as easily have meant “blood coming out of every outlet in her face, including the ears, nose and mouth.” But according to Jim Geraghty at National Review, RedState.com’s Erick Erickson chose to interpret Trump as mentioning the “monthly flow.” Chose, that is, without foundation.