Once upon a time, a long time ago, it was an unusually dark night amongst many dark nights.  There had been continuous days of rain and wind and no daytime sun to help dry out the stores of firewood and kindling that the clan’s people needed for cooking and staying warm.  Only a few had had the insight to gather extra material.  Only those few were at this hour bathed in an amber red glow of warmth, shielded from yet another evening of bone chilling dampness, hunger and uncertainty.

Disaster, and a stronghold 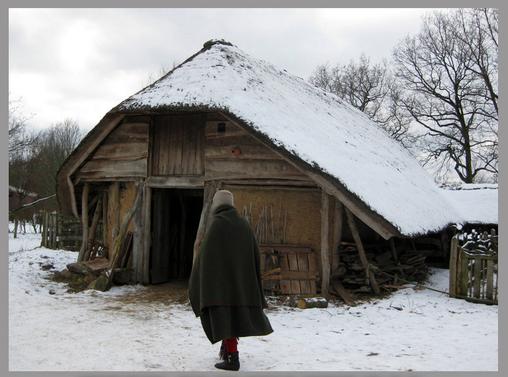 The number of cold dark days had now passed from wonderment and curiosity to downright fear and foreboding.   The question of how many days had it been since the daytime produced other than snow, rain,  wind and dark purple skies formed of a crescent moon and singular star, had now moved beyond most of the people’s ability to count or remember.

The elder of this clan, those knew him as Smra Erif, the meaning of which had been distantly lost in time well before the memory of a long ago sunshiny day, after confidently and proudly scanning his family and kinsmen, peered out of his warm and arid abode, taking in the view of the many dark and cold dwellings which dotted the horizon like pebbles strewn across an endless beach.  He contemplated the unwritten past and how the misery of the many had been created by the few.  As the unquestioned leader of this extended coterie, Smra Erif had refused to obey the foolish edicts of those who claimed to hold responsibility, security and authority over the rest.

Now, with no end in sight and no idea of what may lie ahead, Smra Erif had decided that those who worked with him and ignored the foolish and perilous edicts and did the work required to prepare for epochs such as they now found themselves enduring, would be the only ones entitled to his aegis.  The others, who had forsaken those who understood the danger in allowing incompetents to rule over them, would be denied the resources they refused to assist in the acquirement of.  Because Erif understood the long term survival of those who refused to allow the impedance of their preparations, should and would be of higher value than the short term survival of the spineless and the apathetic.

How did this begin?

Smra Erif recalled how it all started.  How it all came to pass.  As the warm seasons became shorter, the nights became longer and the dangers lurking everywhere became as common as the dreary dusk and the grayed out sunrises, vegetation grew scarce, game animals began to vanish and treks to the wilderness grew longer and longer.  The distances that needed to be traversed just to get the meat and other essentials from the distant tundra and where every mile was fraught with danger and threats, it had become almost impossible to accomplish the task of daily survival.

Then it happened.  Word spread throughout the many purlieus, hamlets and steads. There had been a miraculous invention.  A discovery that would change the lives of everyone fortunate enough to be able to acquire it and use it.   Boxes could be mounted on this invention, material and goods, firewood and all manner of supplies could be transported and moved quickly from place to place.  The work of many could be done by the few, in shorter times and with less effort.  This invention was truly the answer to so many problems which faced the unending work of merely existing.   Some brilliant being had invented the wheel.

What followed was many seasons of plenty, everyone had carts, buggies and coaches.  Some more fortunate people had captured wild animals and in lieu of eating them, used them to pull their carts.  This was viewed by some as too powerful a tool and in fact could possibly hurt or kill someone if the owner of the beast lost control of it.

Then, true to some of the predictions of woe and gloom, there indeed were a few accidents and one sad day there arrived the occasion when a younger was crushed to death by an overloaded cart being pulled by an unnecessarily powerful beast.

Making matters even worse, there appeared groups of cowards and thieves who would by stealth and quickness, use this invention, the ever growing menace, the wheel, to purloin the property of others and disappear into the night.

There began talk of banning the wheel.  Such a dangerous thing it was proving to be.  The clamor for outlawing that dangerous and evil contrivance grew by the day.  The leaders of the many hamlets gathered, plotted and planned on how they could stop the use of the deadly and dreadful wheel.  Even as they reluctantly acknowledged that the wheel was indeed useful at times, it was decided that any value it may have could not override the need to save just one child’s life.

Days and weeks and then months and years found the forced confiscation of all wheels and threatened were those who refused to relinquish their carts and wagons.  Those who had assumed the mantle of protecting the people, especially the children, found many ways of intimidating those who refused to acquiesce.  And many did acquiesce.  Far too many.

And so it came to pass that Erif, understanding the growing perils which loomed ahead, formed a group of his closest cadre and family members and called it, The Right to Roll.  Under his leadership, efforts were made to warn the people of the dangers of giving up the use of the wheel and even as those efforts were disparaged and Erif was threatened with various assortments of punishment, he and his clan continued harboring and using the wheel.

As a result, and as the prognosticated and feared days of cold and gloom pervaded and continued to Sharia across the land, Erif and his clan had used their wheeled carts and wagons to scour the known and unknown tundra, gathered and stored food and fuel and now as the climate continues its chilling effect on plants and animals, his clan will survive. They planned to endure and refused to be propagated to dependency and the whims of others.

It’s time we looked into the looking glass of Smra Erif and we too will declare,

We Plan to Endure.